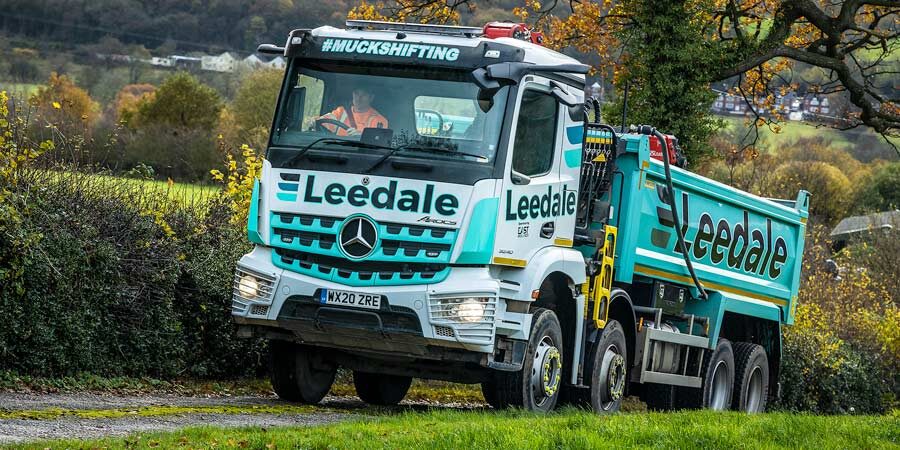 Ambitious construction support services specialist Leedale became one of the UK’s first customers for Arocs tipper-grabs equipped with Mercedes-Benz Trucks’ ground-breaking MirrorCam technology when it commissioned a pair of eight-wheelers in January.

The family-owned business also purchased two tipper-grabs by another manufacturer at the same time. But it was to Mercedes-Benz Dealer Rygor Commercials that it has just returned for the latest couple of additions to its fleet.

So impressed is Leedale with the 8×4 Arocs, and with the rapid turnarounds achieved by Rygor, that the Dealer is now firmly established as its preferred construction truck partner.

The muscular, high-riding Arocs is purpose-designed for operation on rough sites. Like their predecessors, Leedale’s new trucks had been pre-built for Rygor’s WorkReady programme, so were supplied from stock.

Fast-growing Leedale is based in Alfreton, Derbyshire, and operates a fleet of 50 trucks, 20 of them sweepers. Of the remaining tippers, tipper-grabs and flat-beds with Hiab cranes, 17 now wear three-pointed stars – Rygor also delivered six WorkReady 8×4 Arocs tippers with wing mirrors late last year.

Established in 1989 by Lee Walkup, Leedale is a well-established supplier to main contractors, consultancies, developers and public sector clients in the East Midlands. The company provides a comprehensive portfolio of muckaway, aggregates, demolition and general haulage services, as well as waste management, and vehicle and plant hire. It has also seen a surge in demand during the Covid-19 pandemic from homeowners, garden designers and landscapers, for deliveries of one-tonne bags of materials.

Led by Managing Director Oliver Walkup, the founder’s son, Leedale has now embarked on a major expansion programme, its aim being to tender for and win new contracts on a national basis. To this end, it has set its sights on upgrading its current Bronze FORS (Fleet Operator Recognition Scheme) accreditation to Silver at the earliest opportunity, and has just appointed its first National Sales Manager.

Kim Smith joined the company in August and brings an impressive record of achievement in the earth moving sector to her new role. “The construction sector is in full flow and Leedale is extremely busy right now,” she said. “This explains why we needed more new vehicles, and quickly.”

She continued: “We’re committed to a strategy of growth, and to winning new business beyond our East Midlands heartland. Many of the prospective customers we want to target require their suppliers to be accredited to FORS Silver standard. Health and safety, and compliance, are therefore at the very top of our agenda.

“Not only have our Mercedes-Benz trucks proved to be more reliable and cost-effective to operate than other marques on the fleet, but they are also ahead of the rest when it comes to safety. MirrorCam, for example, has been a huge hit with the drivers who are using it. So much better is the level of visibility the system offers that not one of them would want to be without it now.”

MirrorCam’s compact, roof-mounted cameras relay images to screens mounted inside the cab, on the A-pillars. Not only does this pioneering technology provide much-improved rearward vision, but it also eliminates the forward-facing blind spots created by conventional mirrors.

As previously, Leedale took advantage of competitive funding support from Mercedes-Benz Finance to acquire its latest Arocs. Ms Smith observed: “Leedale has built a great reputation and excellent client relationships over more than 30 years, by offering a first-class service.

“That’s also what we’ve received from Rygor Commercials. Its Truck Sales Executive Marcus Cahalin has been both efficient and responsive in delivering our Arocs within a couple of weeks of the orders being placed, while the vehicles are also perfectly specified for the job.”

As well as tippers and tipper grabs, the broad selection of pre-built trucks that Rygor offers under its WorkReady banner includes hookloaders, mixers and skiploaders.

Marcus Cahalin added: “Leedale is a business that’s clearly going places, and it wants to get there as quickly as possible. For customers like this, who need their new trucks with minimal delay, Rygor’s WorkReady programme has all the answers.”

Grabs for Muck-Away and Aggregates
September 23, 2021

Bank Holiday Mini Digger Hire
August 27, 2021
Go to Top
We use cookies to give you the best possible experience on our website. Continuing to use our site means you agree to our use of cookies. Read our Cookie Policy to learn more. Find out more.